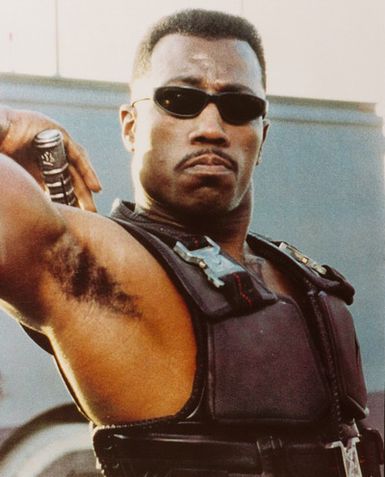 Throughout the ages, philosophers have gone to great lengths to demystify the human condition. Brilliant books have been written, grand speeches have been given, but I argue that none of these men have had more of an impact on the world than the great sage Wesley Snipes.

You’ve seen his movies – Passenger 57, White Men Can’t Jump and the Blade series to name a few – you already know that Snipes is as manly as a man can be. Today I share with you just a few words from his vast cinematic archive, but after you experience and absorb them into your being, your gym performance (and life) will be changed forever.

“Some motherf*ckers are always trying to ice skate uphill.”

As we pass through our time here on Earth, we naturally encounter two sets of people in the gym: the epic hard workers and the ultra slackers.

The hard worker typically trains at least 4 days a week (sometimes 6-7), trying to fit every exercise imaginable into their session before heading off to do their cardio. Marathon gym sessions are common place, as are injuries, weakness and a general sense of wheel spinning.

The slacker makes it to the gym 2-3 times a week (many times less frequently). Showing up in the first place is commendable, but often their time spent actually training is minimal and the effort that’s put in while doing so is lacking in the intensity depart – they’re simply going through the motions. This group is highly susceptible to fad diets and gimmicky fitness devices.

What do these two groups have in common? A lack of results. One because their hard work is misdirected and the other because they’re simply not working hard enough, looking for shortcuts that will hopefully fast track their success.

This is the very definition of ice skating uphill.

Oh Wesley, the duality of your profound statement rends my mind!

Take home point: Lackluster effort won’t get you there, and too much effort will ensure that you burn out before you do. Don’t make the pursuit of your goals more difficult than it needs to be. Sure you could drive with your foot on the steering wheel, but that doesn’t make it a good idea. I too was an uphill skating mofo at one point, so it can be rectified, and life at the top of the hill is beautiful.

Creating the physique that you desire won’t happen in days or weeks, but months and years. You’re in it for the long haul, so approaching it with that mindset makes the road far more enjoyable.

“You can put a cat in an oven, but that don’t make it a biscuit.”

Every gym has that person who has been going there for years but looks exactly the same as they did when they first started. Pure stagnation As much as I hate to admit it, I used to be that guy and it sucked – it was the equivalent of training purgatory – so I’d like to help save everyone I can from that same fate.

Just because you’re following a certain exercise or nutrition program doesn’t guarantee that you’ll be successful. It must be appropriate to you, your goals and your situation. Measurements along the way to see if you’re progressing are a must.

Right from the start, make sure the information you’re getting is from a quality source and that you’re focusing only on things that matter.

Don’t waste time majoring in the minor things – it’s only an illusion of progress.

“You can either smoke, or you get smoked.”

Once you have all the above locked in, the only thing left to do is to act.

Knowledge alone is not enough, and the only difference between success and failure is the willingness to take action, and fortune favors those who do so.

Always bet on yourself. If you don’t believe that you can achieve it, then it doesn’t matter what anyone else says because you’ve already counted yourself out from the start. Even in the face of great difficulty, know that success is inevitable if you continue to push forward and adjust accordingly along the way.

This is an homage to an article found here.