Yeah, I know that I’m crazy, but there really is a method to my madness.

So you’re on a top secret mission from the government, commissioned with the task of flying into enemy territory and taking out as many bases and strongholds as you possible can. Where are you headed exactly? No idea –  that right there is classified information. What you do know is that the odds off success aren’t stacked in your favor. Time is limited and failure is not an option.

Luckily for you, you’re piloting the most well-armed aircraft that the world has ever seen. Her name is the X14 Aunt Esther, and she’s a bad mama jama. Even with her plethora of laser guided rockets and time-space continuum warping bullets, there is one major flaw: she has the armor of a marshmallow and can’t take nearly as much punishment as she can dish out.

Tactics will play a critical role in your mission’s success. So you fly in above the cloud cover, just high enough to avoid their radar while at the same time getting a feel for the landscape.

And then you strike.

You make a nose-dive right into the heart of the enemy’s base with guns blazing, leaving destruction in your wake. You take one hit, they take twenty. More and more enemies are starting to lock onto your position though, so you disengage and take cover above the clouds to recover. Then you swoop down and hit them again, and again, and again.

And then you win. Mission complete.

A lot of people do the exact opposite, though. They spend most of their time above cloud cover (a caloric surplus) with only brief dives into enemy territory (a caloric deficit). When they do decide to dive in, the enemy fire is so great (fear,hunger, emotional eating, old destructive habits, etc) that they retreat high above the clouds again before any real progress is even made. This is how some people end up trying to lose the same 10lbs for years on end, and I hate to see this.

Fat loss should be a high-octane push towards the finish right from the start. Commit to nothing but success, arm yourself with the knowledge and foods you’ll need and dive in for the kill, staying there as long as you can. Take a break when you can’t handle the heat anymore, but only long enough for you to recover and prepare for another descent.

Get in and get out.

Everyone can’t adhere to the same harsh deficit due to a wide variety of lifestyle factors that have to be taken into consideration, but what they CAN do is make the decision that they’re going to spend more time fighting the enemy than running from them. By doing this, it’s only a matter of time before victory is achieved.

This is my declaration of war. I’m publicly committing to getting leaner than I’ve ever been right before your very eyes. For 8 weeks, every other week I’ll update with pictures and share with you what has worked for me along the way, showing how you can apply it to yourself as well.

The goal is to reach a minimum of 180lbs while maintaining my strength and muscle mass. 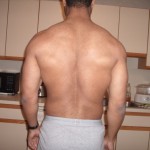 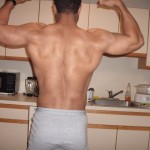 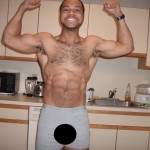 If you’re tired of having your fat loss goals evade you, then I encourage you to enlist alongside me in this battle as well by leaving a comment in the comment section. You don’t have to post pictures of yourself. Committing to yourself and moving forward towards your goal is all that’s required.

In 8 weeks you’re going to either be the same, better or worse off than you were before – which path are you going to choose?